The Kinarm Gaze-Tracker is an optional component of a Kinarm Lab. It is based upon the Eyelink 1000+ with the Remote option, from SR Research. When first introduced, the calibration routine for the Kinarm Gaze-Tracker was based upon the one recommended for use with the Eyelink 1000+ with Remote option. However, over the past 10 years it has become clear that this routine is slow and often difficult to achieve a good calibration. Two factors contribute to these problems: the large number of target locations used in the calibration routine (13), and large size of the region over which the calibration is attempted.

The large number of points used in the calibration routine creates two problems. The first problem is that it contributes to a slow calibration because each point needs to be fixated by the subject 2x: once during calibration and once during validation. The time taken to achieve 26 successful fixations is not insignificant. This large number of points then has a secondary problem, because any mistake by the subject (i.e. accidentally not looking at the fixation target) can result in a failed calibration, requiring the entire calibration/validation to be re-done, which again will slow the overall process of calibration.

While it is obvious that reducing the number of target locations used by the calibration routine would make it faster, the impact on accuracy of the data must be assessed. Likewise reducing the size of the calibration region will obviously increase the likelihood of a successful calibration for subjects who have difficulty with proximal targets, but again it is unclear what the impact of the change might be. The purpose of this study was to quantify these effects on calibration accuracy.

Data were collected from 30 adult subjects, from 6 different sites using Kinarm Labs (1 site was BKIN Technologies). Of these 6 different sites, 4 had Kinarm End-Point Labs and 2 had Kinarm Exoskeleton labs. Dexterit-E 3.9 was used for all data collection. For each subject, four calibration options were tested:

For each calibration option, the following steps were followed:

Figure 1. For each trial, Fixation events are used to identify the start of a fixation. Data over the subsequent 200 ms are averaged.

The results of this study are shown in Figures 2 and 3 below. 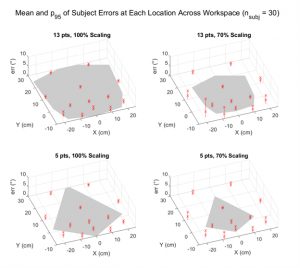 Figure 2. The mean and p95 values across all 30 subjects were plotted at each target location. The grey shaded area indicates the nominal shape of the region calibrated by the 5 or 13 point calibration routine. 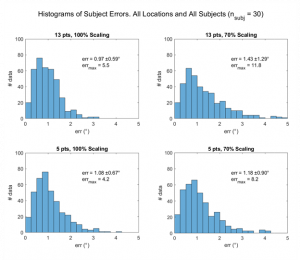 Figure 3. The errors from all subjects, at all locations, were combined into separate histograms for each of the four calibration options. The mean ± standard deviation was calculated for each histogram, along with the maximum error recorded.

As measured by both mean and standard deviation, the calibration with the best accuracy is 13-point, 100%, followed by 5-point, 100%, 5-point 70% and 13-point 70%. When calibrating over a small region (i.e. 70% calibration space), 13-point calibration extrapolates poorly, when compared to the 5-point.

As expected, reducing the number of calibration points results in a less accurate calibration when 100% scaling is used. However, the loss in accuracy is quite small, whereas in comparison the gain in speed of calibration is quite dramatic (i.e. ~2.5x faster).

With the 5-pt calibration, decreasing the region over which calibration is performed from 100% to 70% again decreases calibration accuracy, but again, the loss in accuracy is quite small. Although not explicitly tested, it seems likely that the error associated with intermediate scaling (e.g. 90% or 80%) would have accuracies in between those observed for 100% and 70% scaling.

Except for the most demanding applications requiring the highest accuracy, most Kinarm users would benefit greatly from switching to the faster 5-point calibration. Furthermore, a smaller calibration region (e.g. 70, 80 or 90%), which would lead to an increased likelihood of a successful calibration, would also most likely be acceptable for most Kinarm users.

How to Manually Change the Number of Calibration Targets to Either 5 or 13.

With Dexterit-E 3.9.1 and later, the number of calibration points can be changed manually in the DEX.INI file, using the following instructions: