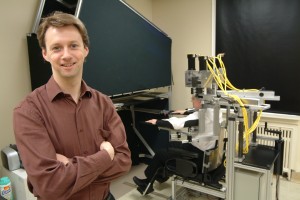 BKIN Technologies Ltd. is pleased to announce that Dr. Stephen Scott, BKIN’s Chief Scientific Officer and inventor of its flagship technology, KINARM, has received two major awards for his pioneering research into understanding brain function and measuring the effects of brain injury.

Dr. Scott has been named Queen’s University’s first GlaxoSmithKline-Canadian Institutes of Health Research (GSK-CIHR) Chair in Neurosciences. The award enables him to continue his world-leading research into understanding brain function while at the same time translating his findings into real-world clinical tools.

Dr. Scott has also been awarded the prestigious Barbara Turnbull Award, presented annually to the top-ranked spinal cord-related research grant in Canada, as identified by the Canadian Institutes of Health Research (CIHR).  The $50,000 award supports Dr. Scott’s contribution to the search for a spinal cord injury cure.

BKIN’s KINARM™ is the world’s first robotic system for measuring, with exquisite sensitivity and precision, the effects of brain injury on an individual’s ability to perform ordinary movements and tasks. The system is being used to examine a wide range of brain injuries, from stroke and concussion to fetal alcohol spectrum disorder.

The KINARM is now in use at 35 research institutions worldwide, including Johns Hopkins University, Tokyo University and the Toronto Rehabilitation Institute.

“The work of our Chief Scientific Officer and his research team have been key to BKIN’s success,” says Anne Vivian-Scott, President and CEO. “It’s gratifying to see Dr. Scott’s expertise recognized with these two prestigious awards, and we’re excited about the potential for continued breakthroughs in our understanding and treatment of brain injury. ”