Kinarm’s development team is proud to release Dexterit-E 3.8.0 and Dexterit-E Explorer 1.5.0 with lots of improvements for usability and task development. We are thrilled to be able to deliver the long list of tangible improvements, both big and small, that this release offers. A complete list of changes is included in the release notes with each product.  Below we’ve highlighted the main enhancements for each product.

Although the problem appears to be theoretically possible with Dexterit-E 3.6 and 3.7 and the same set of specific conditions listed above, we have performed extensive testing and have not observed any instances of the problem with those prior releases. Dexterit-E 3.5 and earlier are not affected by this issue.

The impact of the problem is that for some compiled tasks, all data collected with that task will contain spikes in one or more of the velocity (and acceleration) signals.
The root cause of the problem is that when some tasks are compiled, the code is arranged such that reads of the National Instruments 6229 card happen before reading the position signals from the robots. When the reads of the 6229 card are at < 2 kHz this read ordering means that reading the signals from the robots occur at different times in each data frame. For some tasks, this variable timing can lead to partial reads of position and timing signals during a single frame – which subsequently leads to incorrect calculations of joint velocity.
The incorrect velocities will appear as spikes in the velocity (and therefore acceleration) signals. Tasks which have this problem and which rely on velocity in real-time (and do not filter the velocity) may behave incorrectly. Tasks which rely on acceleration signals in real time will not be able to appropriately filter the incorrect data. In saved exams, standard kinematics filtering (e.g. using the filter function from Kinarm Analysis Scripts) will appropriately handle and remove most of the velocity spikes, with some small residual effects. Standard filtering techniques will not help the acceleration data.

Our testing indicates about 20-25% of tasks which meet all of the outlined criteria will be affected. The only way to tell if your task is affected is to review the velocity data for obvious and inappropriate spikes of ~ 1/3 the magnitude of the nominal velocity. If a data file is found to contain velocity spikes, then all data collected using that compiled task will be affected.

Study Protocols were introduced in Dexterit-E 3.7 in order to add task ordering and provide a user interface for performing studies. In Dexterit-E 3.8 we have extended this functionality with the concept of Study Sessions. Within a Study Protocol, you can now define one or more Study Sessions, which allow a subject to be assessed multiple times at pre-defined points during the same Study, e.g. 60 days post intervention, 90 days post intervention.

When Study Sessions are used with KST, the upcoming release of Dexterit-E Explorer will be able to create session and longitudinal reports based on those sessions. These new report types allow you to see Task Scores for Kinarm Standard Tests that were run as part of a Study. Please see the Dexterit-E Explorer documentation for further details.

When editing Task Protocols it is now possible to tell which Trial Protocols, targets and loads are going to be used. Each table will automatically highlight those rows that are identified as ones which will be run, based on the contents of the Block Table and TP Table. 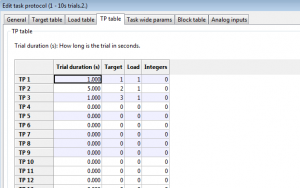 There are two new ways to manage and control the ordering of trials when a task is run: one enhancement is with the Block Table, and one is available through custom task programming.

Block Table enhancement: when editing a Task Protocol, the Block Table has been enhanced to allow nested lists of Trial Protocols which must remain contiguous after randomization. Furthermore, these contiguous lists can be specified to either be non-randomized or internally randomized. The following table contains two examples:

Custom Task Programming enhancement: there is now the possibility to determine trial order at runtime. When programming a Custom Task, there is a new optional input on the GUI Control block that allows a task programmer to specify the next Trial Protocol to run. In this way you can calculate dynamically at runtime the trial ordering for your task. This feature completely ignores the Block Table within a Task Protocol

All Kinarm Standard Tasks have been updated to output digital TTL pulses on the standard National Instruments PCI-6229 that is purchased with many Kinarm Labs. These pulses provide timing and trial information to enable synchronization with external equipment.

As part of our ongoing work to improve the accuracy of the normative models for KST, the algorithm to fit models to the normative data was updated to use weighted least-squares regression. This change was made to account for the heteroscedasticity in the data. While most normative models had negligible changes following this change, the inter-limb Z-scores of Elbow Stretch for female subjects collected using the Kinarm Exoskeleton, had very large changes; these data should be re-analyzed. See the Dexterit-E User Guide or KST Summary for more details.

In recent years several other programming languages have become popular for data analysis, notably Python and R. Rather than try to build Kinarm Analysis Scripts for every possible language we have added the ability to output the kinematics and parameters of an exam file in a commonly readable format – Comma Separated Values (CSV). CSV is a text based format that any programming language can interpret. Kinarm Support will be providing example code for reading the CSV files that Dexterit-E Explorer will create.

Dexterit-E Explorer gives you the ability to right-click on a single exam file to export in CSV format, or to perform a bulk export of many exams to CSV.

This release of Dexterit-E Explorer contains several additions to the channel graph to enhance usability, including:

As part of our ongoing work to improve the accuracy of the normative models for KST, the algorithm to fit models to the normative data was updated to use weighted least-squares regression. This change was made to account for the heteroscedasticity in the data. While most normative models had negligible changes following this change, the inter-limb Z-scores of Elbow Stretch for female subjects collected using the Kinarm Exoskeleton, had very large changes. Previously analyzed data should be re-analyzed. See the Dexterit-E User Guide or KST Summary for more details.