Dr. Sean Dukelow MD PhD, FRCPC initiated his research program into quantifying deficits in stroke patients since back in early 2008. He has published extensively in the area and benefits from having KINARM Exoskeleton Labs available for his research at both acute and chronic care centres. 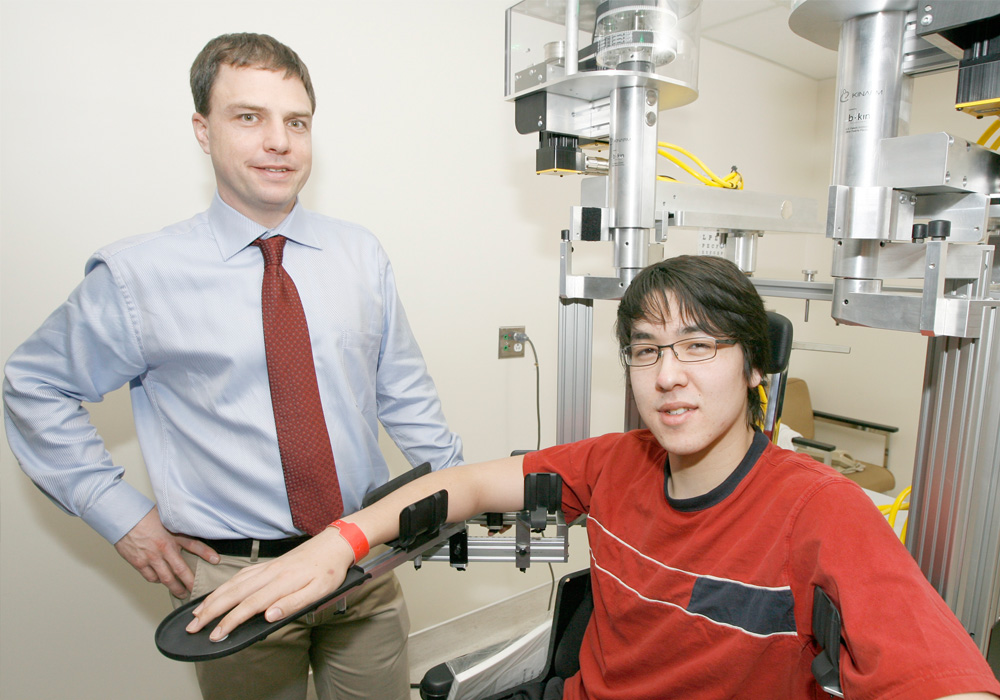 Clinician scientists have always used their keen perception of human behavior to identify neurological impairments, and help diagnose brain disorders. A clinician will look at how a patient moves and interacts with them during a standard neurological exam. However to assess these functions, the clinician must rely heavily on their subjective estimate of the patient’s ability to perform behaviors that represent various functions. For example, to test visuomotor coordination, the clinician assesses the ability of a patient to touch their nose and the clinician’s finger. The test is scored on a three point scale ( 0, 1 or 2) – a necessarily coarse ordinal score to ensure reliability. Unfortunately, such coarseness makes it difficult to: identify subtle changes in sensorimotor function, such as small delays in reacting or increases in movement variability; and leads to floor and ceiling effects in the scoring system.

An article by Alberta Health Services reported: Often stroke patients undergo lengthy and repeated clinical testing. Dr. Dukelow says the KINARM can test for the same deficits in a matter of minutes. “What we find is that the robot is more sensitive in picking the deficits up in terms of movement, and we hope this will give us new insight into developing treatments,” says Dr. Dukelow. The robotic system helps to identify deficits that are sometimes difficult to pick up on a standard clinical exam, but are important for day to day function.Dr. Dukelow has now begun developing novel approaches towards helping patients recover from the effects of their stroke using the KINARM Exoskeleton Lab.

Dr. Dukelow has authored papers that use KST tasks (Visually Guided Reaching, Arm Position Matching and Object Hit) and has created a Custom Task called the Kinesthesia Task for measuring kinesthetic deficits. Importantly he has looked at relationships between different types of deficits, such as: motor and proprioceptive deficits; and visuospatial (using BIT) and kinesthetic deficits (using KINARM). He’s also researched the relationship between anatomical lesion and sensory and motor deficits. His studies have been recognized by the AHA as “generating data that cannot be obtained by a human examiner.” (Winstein et al, 2016)

Dr. George Mochizuki, PhD, at the Sunnybrook Research Institute, in partnership with Allergan Canada and Toronto Rehab Institute, used the KINARM Exoskeleton Lab to assess the effectiveness of BOTOX® injections in the rehabilitation of stroke survivors with spasticity

A novel KINARM Standard Test, Elbow Stretch, has been developed to quantify spasticity and tone that is more sensitive than the Modified Ashworth Scale or Modified Tardieu Scale (Centen, et al, 2017)

The team used the KINARM Standard Test suite to capture measures of impairment at several time points during the study. Read more on how the team is currently analyzing the effectiveness of BOTOX injections.

With his expertise in gaze-tracking, he is developing quantitative assessment tools for gaze-motor control, eye-hand coordination, and visual cognition using the KINARM Gaze-Tracker integrated. To give him a faster start on developing these new tools, BKIN has provided Dr. Herter with a Dexterit-E development license to allow him to develop unique Custom Task variants of the KINARM Standard Tests.

This work has been published and is available through Plos One and noted “Quantitative robotic assessment showed that people who have had a TIA display a spectrum of upper limb motor and sensory performance deficits as well as cognitive function deficits despite resolution of symptoms and no evidence of tissue infarction.”

A subject in the study, wrote about her experience as a subject and why she wanted to contribute to KINARM Research on the CAHO website.

Dr. Brian Benson, PhD, has the unique opportunity to conduct sport concussion research at the state-of-the-art WinSport Medicine Clinic at the Canadian Sport Institute in Calgary. Dr. Benson, the Director of Sport Medicine for CSIC says that for concussed individuals “timely access to the best possible clinical care is critical to ensure an optimal recovery and safe return to play”. 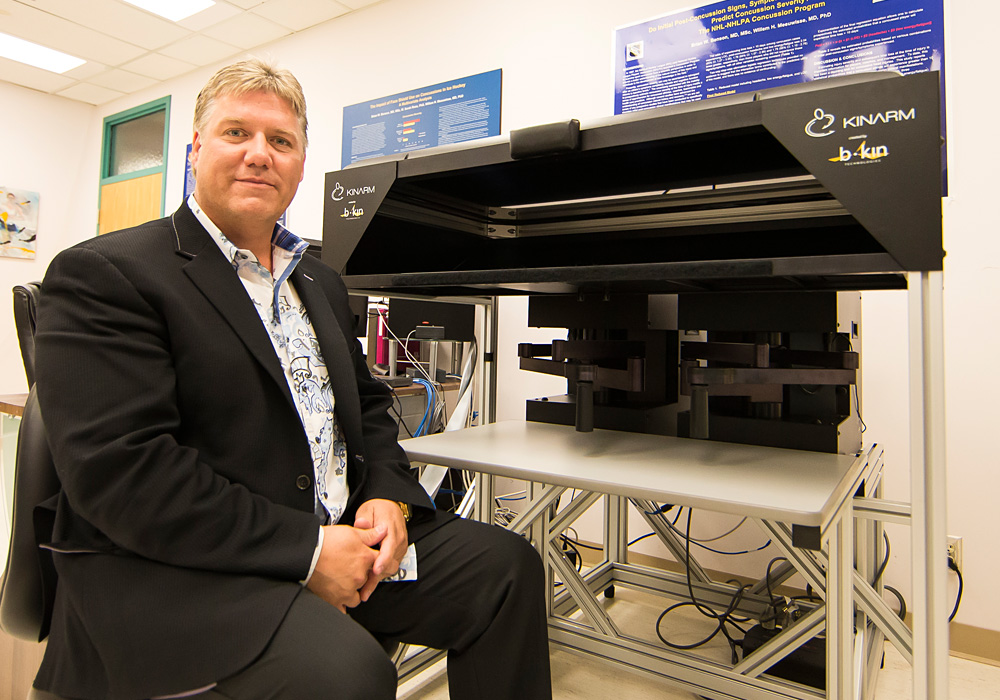 In 2012, Own The Podium (OTP) funded a research project that enabled the purchase of a KINARM End-Point Lab. This has been since upgraded to the Adjustable Height Configuration giving Dr. Benson the opportunity to look at upper limb voluntary control and its integration with whole body postural control. His goal is to objectively analyze post-concussion brain dysfunction and sensorimotor recovery that are critical for a safe return to sport, optimal sport performance, and prevention of repeat or other injuries. Ultimately the goal is to reduce the chances that a high performance athlete returns to play too early.

Dr Sean Dukelow, MD PhD, applied his same desire to differentiate neurological impairments resulting from stroke to a chronic population of TBI subjects at Foothills Hospital, Calgary. He assessed visuomotor and position sense impairments with the KINARM Exoskeleton Lab in subjects with initial severities severe to mild TBI. He contrasted the KINARM measures with those of the clinical tests. Subjects with TBI demonstrated a broad range of sensory and motor deficits on robotic testing.

Notably, several subjects with TBI displayed significant deficits in one or both of the robotic tasks, despite normal scores on traditional clinical motor and cognitive assessment measures (Debert et al, 2012). For the study, Dr. Dukelow used the 9-target Visually Guided Reaching task and the 8-target Arm Position Matching task. Both tasks are now also available in shorter versions to reduce clinical time used for the test.

Dr. George Shaw, MD PhD, Associate Professor of Emergency Medicine and Dr. Fred Beyette, PhD, Professor of Electrical Engineering and Director, Point-of-Care Center for Emerging Neurotechnologies at the University of Cincinnati, presented two challenging questions: can KINARM Standard Tests predict post-concussive syndrome in patients presenting to the Emergency Department (ED) with a mild traumatic brain injury;? and could we put the KINARM End-Point Lab on wheels for testing in the ED? Neither had been done before. 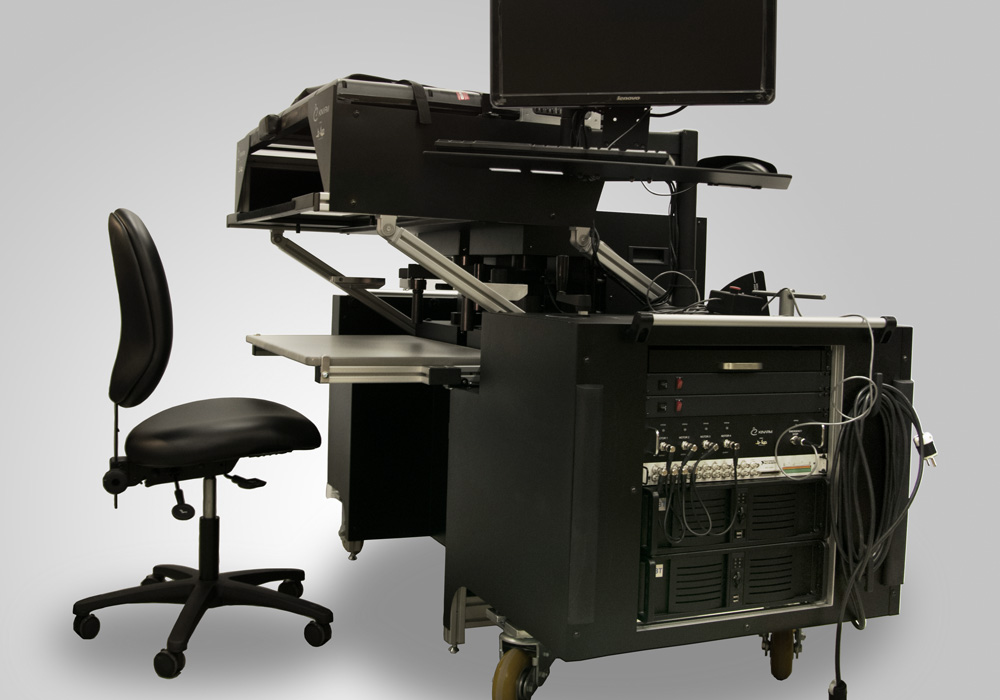 To enable the group to conduct the study, the BKIN team had to tackle the second question first: mount 1000 pounds of hardware and electronics on to wheels with a footprint no greater than a hospital bed. The hardest requirement was figuring out how we were going to get it through any door. In a hospital setting, 34 inch doors are to be expected; BKIN’s End-Point Lab requires 48 inches. It was a real challenge, given the rough and busy environment of an ED. The creative engineers at BKIN redesigned the device and created the first “rollable” KINARM End-Point lab.

The key innovation came when the team figured out how to retract the virtual reality display.

Suspended by four hydraulic lifts when in use, the virtual reality system can be raised up and over the KINARM robots to “squeeze” the system down to the required width. In the retracted position, the system can be wheeled around the ward to the next research subject. The new rollable KINARM End-Point facilitated successful integration of the device into UC’s trauma center and provided the investigators with a novel tool to conduct active clinical research in a hospital setting.

The UC team has recently published (Subbian, et al, 2016) the findings from their first study and found that assessment with a sub-set of KINARM Standard Tests during initial presentation in the emergency department was predictive of post-concussion syndrome with high confidence: “The area under the receiver operating characteristic curve (AUC) for the entire test battery was 0.72 (95% CI 0.54 – 0.90). The AUC for tests that primarily measure visuomotor and proprioceptive performance was 0.80 (95% CI: 0.65 – 0.95) and 0.71 (95% CI: 0.53 – 0.89), respectively.”  They have also published a feasibility study on the integration of the KINARM Lab into an ED setting (Subbian, et al, 2015).

Dr. Gordon Boyd, MD PhD, a neurologist, intensive care physician and clinician-scientist, is studying how poor brain tissue oxygenation (BtO2) during the first 24 h of critical illness impacts brain function and long-term neurologic health. He is the first to connect low cerebral oxygen levels to an increased risk of developing delerium. He has commented on the alarming rate of delerium suffered by patients in critical care and the ballooning health care costs for these brain injuries created while in critical care. The KINARM Standard Test suite provides his research with the objective and quantified brain function data needed to test his hypothesis. Similarly, his work with patients who have suffered from cardiac arrest is focused on predicting how patients react the first few days after a cardiac incident, and how to create tests to better gauge the level of damage suffered due to the loss of blood and oxygen during an arrest. By doing so, he hopes to be able to develop processes and treatments in the ICU that have a significant impact on patient recovery.

Please feel free to contact us, we’d be happy to help.