END_OF_DOCUMENT_TOKEN_TO_BE_REPLACED

**Post event update: a recording of this event is available here.**

END_OF_DOCUMENT_TOKEN_TO_BE_REPLACED

Neuroscience is next week, and while we truly wish we could meet you in-person, we hope that you will connect with us through one of these options:

Attend one of our Neuroscience Virtual Networking Events

END_OF_DOCUMENT_TOKEN_TO_BE_REPLACED

We’re back in the swing of things and looking forward to engaging with you at these upcoming meetings!

In order to apply the membership discount, please proceed as follows:

We are very proud to be sponsoring the first conference on Progress in Clinical Motor Control: Neurorehabilitation at UPenn this summer.  The meeting will bring together leading scientists in the basic, engineering, and clinical sciences to exchange and share research and development in cutting edge science and technology applied to neurorehabilitation.  http://hhd.psu.edu/college/motor-control-conference

We still have a couple of spots available for our 5th annual KINARM Camp. It will be held Monday, May 14 to Friday noon, May 18, 2018 in Kingston, Ontario.

The preliminary agenda can be viewed here: KINARM Camp 2018.DRAFT

Attendance is limited to 12 registrants, so please complete the registration form to hold your spot.

If you’re awaiting approvals, please complete the form nonetheless and note that your attendance is tentative. 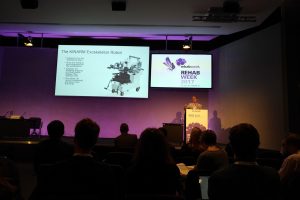 Long-time KINARM Lab user, Dr. Sean Dukelow, spoke at the International Neurorehabilitation Symposium in London, UK last week.  INRS was one of four conferences that bound together for the biennial installment of RehabWeek.   In his session, he described his research related to identifying and quantifying neurological impairments from stroke, concussion, CP and other disorders.  He spoke of his long-term longitudinal study monitoring outcomes from over 100 subjects with stroke. Over the 6 month period he noted clear differences between early responders, late responders and non-responders. His results highlight the need for more sensitive, targeted identification of sensory and motor deficits to optimize rehabilitation after stroke. Further he has noted that the trajectory of recovery for some individuals with mild to moderate stroke may be much longer than previously considered. underlined the need for better characterization of impairments post stroke (Semrau, et al, 2015).