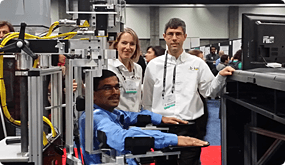 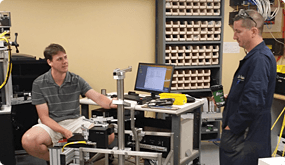 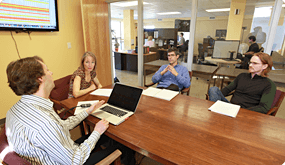 Kinarm was developed out of a shared aspiration to shed light on the field of sensorimotor neuroscience.

Unsatisfied with the available tools for assessing upper-limb voluntary motor control, Dr. Stephen Scott of Queen’s University invented the first Kinesiological Instrument for Normal and Altered Reaching Movement (KINARM) prototype in 1998. He used it in his basic research to quantify and manipulate the mechanics of multi-joint motion in the NHP while recording neural function (Scott, 1999). After this initial study, it became apparent that the KINARM model was useful for studying not only motor control, but also a range of other sensory and cognitive functions. Dr. Scott soon began receiving requests from other researchers who wanted to use the technology in their research, and so in 2002, partnered with Dr. Ian Brown in order to assist with its development. Together they extended the robot to a human-sized version, and in 2004, founded BKIN Technologies with the guidance Queen’s University’s PARTEQ Innovations.  You can listen to the story of our formation.

Since its establishment, the company has expanded significantly. In 2006, the original system was modified to a more clinic-friendly version called the Kinarm Exoskeleton Lab, and included two robots, one for each limb (Nozaki et al., 2006). A second platform called the Kinarm End-Point Lab was released in 2010, offering researchers greater ability to provide feedback to the hand and enabling tasks where the patient is standing rather than being seated. In 2019, the company was renamed from BKIN Technologies to Kinarm, unifying its corporate identity and its products.

Through years of commitment to creating advanced, innovative products, Kinarm is now able to offer sophisticated technology labs complete with a fully automated operating control software, and integrated gaze-tracking and force plates. In 2019, we renamed the company “Kinarm” to reflect our singular focus on providing interactive robotic solutions for basic and clinical researchers studying the brain. We employ 9 people who are specialists in software and hardware design and development, analytical analysis and advanced manufacturing techniques. We have installed more than 110 human and NHP Kinarm Labs in our 17-year history. All of our labs are manufactured in Kingston with primary electronic and mechanical component sourcing from the United States, Canada and Japan. The Kinarm has been used in over 350 basic and clinical research publications, setting a new standard for the sensitivity and quality of neurological assessment tools. Kinarm enables behaviorography for not just for the neuroscience community, but for the clinical research community as well.